Teenager ,he set up two groups "les Don Dièses"and "Les Alizés". He composes and plays in various Parisian cabarets, as well as at the Golf Drouot. 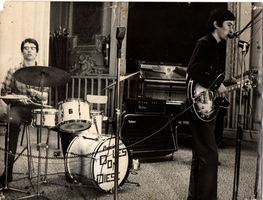 1968 He was hired by the humorist Coluche at the theater La Méthode Ancienne in Paris as a singer.

Concerts at Golf Drouot and Gibus.Paris

1971  Second album  "Le Son tombé du ciel", recorded at Strawberry Studios in the castle of Hérouville by Dominique Blanc Francard. Alain is on guitar and vocals, Joel Dugreno of the Zao Group on bass and double bass, Géza Fenzl of the Dynasty Crisis Group on drums and percussion and Laurent Thibault on the electric piano.

1973  He released a single titled "Le Gluemour" on which he plays acoustic and electric guitar, with on the b-side the title "Le Requin Central". The Gluemour is chosen by Sam Bernett as the music of his radio show Super Club on RTL .

1976   Studio cessions at the Aquarium and at studio Damiens, the tunes have never been published.

Concerts at Bilboquet in Paris

1977  Release of "Le Desert Noir", he is playing guitars, bass and keyboards. Jean François Leroy on drums and percussion, album including also cessions recorded at Studio Damien, with Patricia Pernoo on vocals, Coco Ameziane on percussion and Didier Alexandre bass on Bulgarian-feld.

The same year, he joined the Joan Pau Verdier group with which he composed tunes as Taboo the cat and Easy Cat Rock.

They will performed at La Fête de l'Humanité in front of 120,000 people and also at le Theatre de la Ville in Paris and will participate in the first edition of the festival Le Printemps de Bourges. 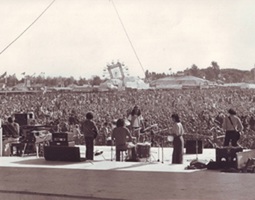 1978 Few concerts in duo with Michel Ripoche, including the edition 1978 of Le Printemps de Bourges.

Release of the album "Platock", with Jean Schultheis, percussions and Patricia Pernoo,voices as well as Claude Achallé, sounds recording.

1979 Release of "Contemporus" on which he plays in full all parts: piano and electroacoustic guitar, organ, percussion, triangle, cymbals, marimba, harmonica, hanclaps and voice. American press by JEM Records.

1980 Tournée in Belgium, in Bruxelles at the Travers and at the Liège. 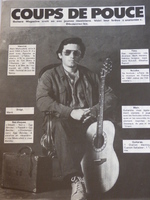 Guitare Magazine interview : Composing and playing music in France in 1980 is a kind of heroism! "

1981 Producing and publishing “Alain Markusfeld double live”, recorded in public and on which he plays piano and guitar.

"This interrogation can  be applied to many domains...

I do not have the answer (or rather the answers).

My only way to react in front of these Questionnings is to pursue my work as "a musical craftman".

A picture takes form, any sorts of forms...

The space filled with sounds, then empties as well as in 'Chaos dancing (by moolight)", the last composition I recorded for this album.

I tried to make it feel a certain nostalgia, the space and may be under the moolight, the perception of the air around us, the fragility of the life, on our boat named The Earth.

By listening to these compositions, some could ask themselves questions...

At least I hope so!!

There is no other instrumentalists in this album, and no programmings either.

All this LP is played  live as the previous one!

You can listen to Alain's music on all streaming platforms as well as Deezer, Spotify, Itunes, Jango, etc... 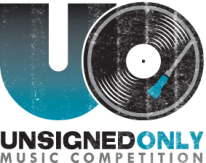